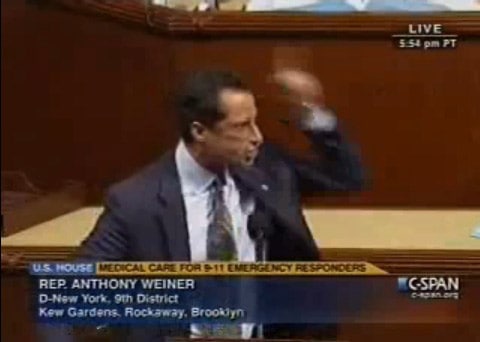 Following the defeat of a bill that would have provided $7.4 billion in health care to 9/11 responders, Anthony Weiner (D-NY) laid into Republicans for killing it.

HuffPost explains: "At the heart of the debate was a procedural maneuver made by Democrats to suspend the rules before consideration of the James Zadroga 9/11 Health and Compensation Act. The move allowed leadership to block potential GOP amendments to the measure (there was worry that Republicans would attach something overtly partisan in hopes that it could pass on the otherwise widely-popular measure). It also meant that the party needed a two-thirds majority vote.When the final tally was announced, there were 255 representatives for the measure, 159 against."

The gentleman "correct in sitting" as Weiner says, is Rep. Peter King (R-NY).