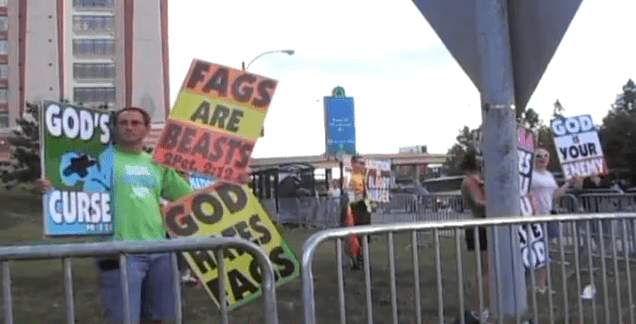 Fred Phelps and his gang of bigoted supporters brought their brand of crazy to Scottrade Center in St. Louis to protest, of all things, Lady Gaga. Why her? Simply because of her pro-gay attitude. While it wasn't the first time they'd protested the pop star (remember this eye roll-inducing music video?), this time Gaga felt a need to send messages to her fans via Twitter and Facebook, encouraging them not to engage with the hateful protesters. 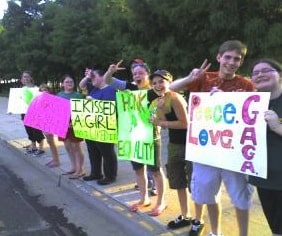 “At the risk of drawing attention to a hateful organization, I would like to make my… fans aware of a protest being held outside the [concert] in St. Louis tonight.”

“My request to [fans] and public authorites[sic] is to pay these hate criminals no mind. Do not interact with them, or try to fight. … Do not respond to any of their provocation. Don't waste your words, or feelings, no matter what you hear or see you are more fortunate and blessed than they are, and in your heart just pray for them.”

Fans showed up anyway, some with a giant rainbow flag and others holding signs of support for not only Gaga ("Gaga for God and Gays") but for all people ("God Loves Everyone").

Watch a clip of photo stills and video footage of the Westboro marchers protesting inside of a barrier at Scottrade Center that makes them look very much like caged wild animals in a zoo. And they're probably just as savage. Video is AFTER THE JUMP.