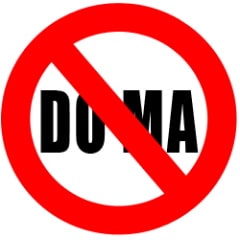 A U.S. district judge ruled today in two cases that the federal Defense of Marriage Act (DOMA) is unconstitutional.

Commonwealth of Massachusetts v. Health and Human Services was brought by the attorney general of the state of Massachusetts (much-maligned failed Senate candidate A.G. Martha Coakley). Judge Joseph Tauro (a Nixon appointee!) ruled DOMA to be in violation of the 10th Amendment, the amendment guaranteeing states' rights.

Gill v. Office of Personnel Management led to a decision that DOMA is in violation of the 5th Amendment, which guarantees equal protection under the law.

From the former case:

"This court has determined that it is clearly within the authority of the Commonwealth to recognize same-sex marriages among its residents, and to afford those individuals in same-sex marriages any benefits, rights, and privileges to which they are entitled by virtue of their marital status. The federal government, by enacting and enforcing DOMA, plainly encroaches upon the firmly entrenched province of the state, and, in doing so, offends the Tenth Amendment. For that reason, the statue is invalid."

Full decisions are here. Do you think President Obama will appeal these cases because he "has to"? Or will he take this opportunity to be on the right side of history? I'm curious to know what his actual options are.

A note on what this means from Talking Points Memo:

"…this is a federal district court decision. To become law it would have to survive the inevitable appeal to the federal circuit court level and then, if it made it there, get through the Supreme Court, which under present management seems hard to imagine."

Freedom to Marry sends this statement:

Linda Lingle must be the saddest person ever.

This news was first broken by the Gay & Lesbian Advocates & Defenders legal organization via Twitter—you may want to follow them here.

In even more potentially good news, Judge Vaughn R. Walker's calendar for July is clear—his ruling on Perry v. Schwarzenegger could come at any time—and it's expected to be another cause for celebration.