"The Republican governor filed his brief with U.S. District Court Judge Vaughn R. Walker before a Friday deadline to submit arguments on whether to continue a stay of Walker's decision against Proposition 8.'The Administration believes the public interest is best served by permitting the Court's judgment to go into effect, thereby restoring the right of same-sex couples to marry in California,' wrote Kenneth C. Mennemeier, an attorney representing Schwarzenegger, in the brief. 'Doing so is consistent with California's long history of treating all people and their relationships with equal dignity and respect.'" 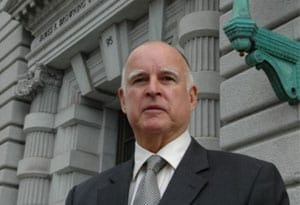 "Brown told U.S. District Chief Judge Vaughn R. Walker that his historic ruling that overturned Proposition 8 probably will be upheld by higher courts. He said his office last year opposed a pretrial request to block Proposition 8 only because the legal and factual issues had not then been explored.'That has now occurred,' Brown's office said. 'And while there is still the potential for limited administrative burdens should future marriages of same-sex couples be later declared invalid, these potential burdens are outweighed by this court’s conclusion, based on the overwhelming evidence, that Proposition 8 is unconstitutional.'Gov. Arnold Schwarzenegger is also expected to oppose a hold on the ruling."

Written arguments were due today regarding the stay. Walker has said he'll decide after reviewing them.

Read Brown's motion, AFTER THE JUMP…