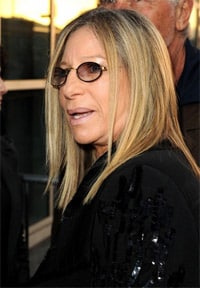 "With this judge's decision, we are closer to the day that all people will have access to the same fundamental rights. Hopefully, this remaining civil rights violation will soon be a part of our past and we can look to a future where all people will be treated equally under the law."

Streisand's statement really rubbed playwright and activist Larry Kramer the wrong way, enough so for him to post this searing response on the ACT UP forum:

"Barbra Streisand is a hypocrite. If she had made my play about AIDS, The Normal Heart, in 1986, when she first acquired the rights, only to sit on them for a full ten years without filming it, she could have done something for gay rights when we were really in the sewer of death. But no, she chose to go off and make such vitally important and classic movies as Nuts and The Mirror Has Two Faces. Barbra Streisand cares about gay rights as much as i care about spending a zillion dollars decorating a colony of houses in Malibu. As the mother of a son who is not only gay but HIV positive, she should be ashamed of herself.

Fortunately and at last, an exciting movie version is now being prepared by openly gay director-producer Ryan Murphy to star Mark Ruffalo. i hope it will prove that the best thing that happened for The Normal Heart is that Barbra Streisand didn't make it.

I think it is important for all her many gay fans around the world, which certainly had once included me, to know the above.

Note: Kramer sent a correction regarding the earlier, incorrect date.