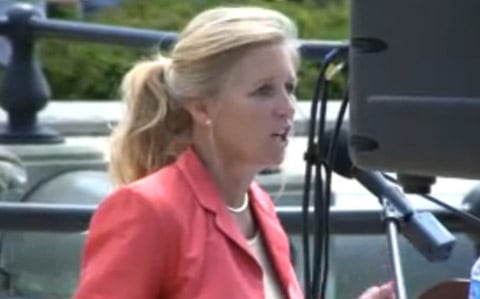 Tamara Scott of the Concerned Women for America was one of the speakers at the NOM rally in Des Moines on Sunday. She claimed that outlawing gay marriage will improve the economy:

Said Scott: "This is not simply a party issue. It's a Biblical issue. Now I expect somebody like SNL will come along and make fun. We'll see the Church Lady revived. That's okay. I'd rather have man mad at me than be a stench in the nostrils of the God almighty."

She added: “It costs you, the taxpayer, as high as $280 billion a year for fragmented families, that's according to the Family Research Council, May 14, 2009. That's three trillion a decade…If we would correct the breakdown of the family by one percent, we could save the taxpayer $3 billion a year. To sit back and do nothing — we become part of the problem. We all need to help out here. It's too big for any of us. There's plenty of evil to go around."

Watch Scott spew her hate, AFTER THE JUMP…