Lutheran Pastor Tom Brock, whose attendance at a support group for Christians with same-sex attractions was exposed by Lavender Magazine in June, has been allowed to return to the pulpit after a task force could find no evidence that he had ever slept with a man,  the AP reports: 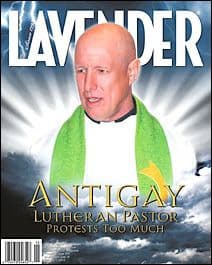 "Brock told The Associated Press he has known for years he is sexually attracted to men, but doesn't consider himself gay because he never acted on it. 'I am a 57-year-old virgin,' Brock told the Hope Lutheran congregation during services upon returning to the pulpit on Sunday.

Brock and Parrish would not share the full task force report, but Parrish said its members could find no evidence Brock ever had sex with men. They confirmed that Brock sought counseling and enlisted another minister as an 'accountability partner' with whom he frequently discussed his struggles.

Brock said he intends to step down as senior pastor at Hope Lutheran, but will retain his affiliation with the church and still preach there from time to time."

And – ugh – "Having preached on Twin Cities cable access for about 20 years, he told the AP he hopes to take his broadcasts to a wider national audience with a new message: 'You can have this struggle with same-sex attraction, say no to it, and still follow Christ.'"

Perhaps Brock and Ted Haggard can collaborate on a variety show.