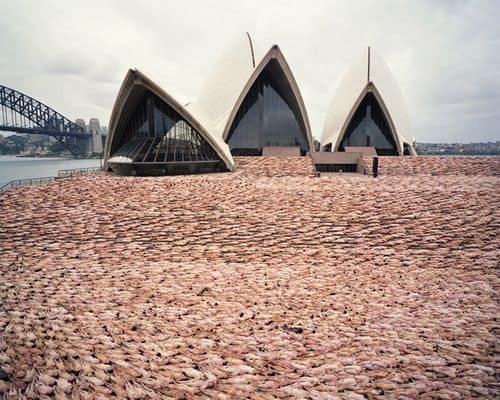 A carpet of 5,000 nude bodies forms "the base" of the Sydney Opera House in the latest work from photographer Spencer Tunick, shot during the city's Gay and Lesbian Mardi Gras in March, SX News reports:

"Presented by New Mardi Gras, it was one of several installations captured on the day with images also set in the venue’s Concert Hall and neighbouring Royal Botanic Gardens. An extra installation took place at Lady Bay Beach the following day featuring New Mardi Gras members.

Every participant will receive a limited edition print.

'We’re thrilled to reveal the premier image of The Base,' said NMG CEO Michael Rolik, CEO. 'Not only did the 5,000 participants enjoy a wonderful experience of taking part in a Spencer Tunick artwork, but the ideas of equality the image evokes are central to the reason we celebrate Mardi Gras.'”

Another image, shot at Lady Bay Beach in Sydney, can be viewed here.