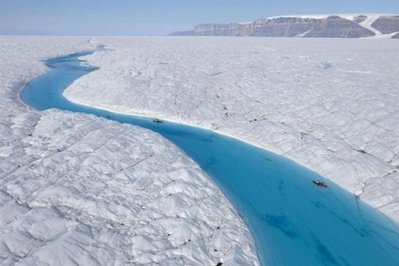 An ice sheet four times the size of Manhattan, the largest chunk of ice the Arctic has lost in almost 50 years, has broken off the coast of Greenland. Even more frightening, National Geographic claims that this might even be the largest glacier collapse in recorded history. 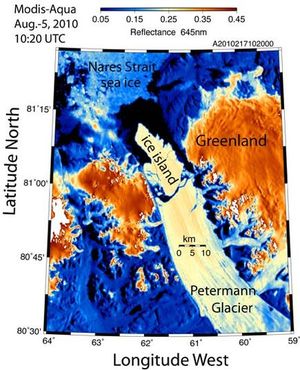 The so-called "ice island" covers a hundred square miles (260 square kilometers) and holds enough water to keep U.S. public tap water flowing for 120 days, according to Andreas Muenchow, a physical ocean scientist and engineer at the University of Delaware.

As a result of the collapse, Petermann glacier—located about 620 miles (1,000 kilometers) south of the North Pole—lost about a quarter of its 43-mile-long (70-kilometer-long) floating ice shelf, satellites images taken Thursday show.

Regine Hock, a glacial geophysicist at the University of Alaska Fairbanks, said the breakup of ice shelves is "a normal process that happens all the time." (See a photo of an ice shelf collapse in Antarctica.) But such a "huge, huge piece of ice … is very unusual," Hock said.

Greenpeace predicted the collapse of the "ice island" last year. Watch a video of their investigation AFTER THE JUMP.