Late yesterday, Protect Marriage filed the expected appeal of Judge Walker's ruling lifting the stay on Prop 8, a 95-pages document, which NOM Trial Tracker notes, "does not seem to [contain] any new arguments that Judge Walker has not already rejected." 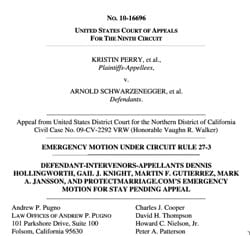 "At any rate, the inference of anti-gay hostility drawn by the district court is manifestly false. It defames more than seven million California voters as homophobic, a cruelly ironic charge given that California has enacted some of the Nation’s most progressive and sweeping gay-rights protections, including creation of a parallel institution, domestic partnerships, affording same-sex couples all the benefits and obligations of marriage. Nor can the court’s inference be limited to California, for it necessarily attributes anti-gay animus to all who affirm that marriage, in its age-old form as the union of a man and a woman, continues to rationally serve society’s interests, including the citizens and lawmakers of the 45 States that have maintained that definition, the Congress and President that overwhelmingly passed and signed into law the federal Defense of Marriage Act, a large majority of the federal and state court judges who have addressed same-sex marriage, and the current President of the United States."

Read Ari Ezra Waldman's analysis of Walker's ruling, if you missed it, HERE.

Read the full appeal, AFTER THE JUMP…