The Advocate's Brandon Voss talks to Katy Perry about her relationship with gay fans: 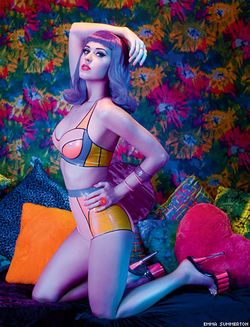 On accusations of homophobia and exploitation stemming from her "I Kissed a Girl"  and "UR so Gay" tracks:

"I always knew I wasn’t going to be everybody’s darling. I knew I was going to get a thumbs-up and a middle finger at the same time. Some people love you and some people hate you, but at least you’re on people’s minds. Everyone has an opinion about someone who gets popular, but I’m a strong enough character to take it all. Hopefully, after getting to know me and seeing all of the dimensions of that record, people know that I’m not a one-trick pony and that it was just part of the party…Some people thought 'I Kissed a Girl' was the stupidest fucking song ever, but to other people it was a cute adopted anthem that maybe helped someone in some way or said something for someone that was on the tip of their tongue."

"It’s absurd that it’s not equality for all. The fact that we’re still dealing with it is stupid. It’s like, fuckin’ come on! It’s interesting because I come from a whole different world where I was raised with the idea that being gay was taboo and not right. Even though I love my parents and we can agree to disagree, I’m glad I’ve had my eyes opened…I went to Christian school and I was involved in church camp, so everything I did was related to the church. I just remember that gay people were looked down upon and never to be talked about — and that’s why I wanted to hang out with them. [Laughs] I didn’t know any openly gay people until I moved out on my own at 17, and I quickly saw that they were more fun than straight people." 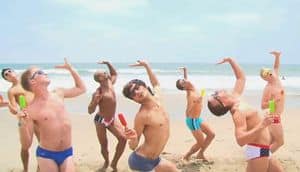 And finally, on the "California Gays" spoof video:

"It’s hysterical. I love it when they do the fight between the East Coast and the West Coast — I still don’t know how they made it look like the car ran those guys over. I mean, these are like actual filmmakers, so it’s awesome. For me, what signifies that a song works is when cheerleaders are making up cheers to it or when people are making parodies of it, putting in their own personal time and sometimes money to make a video and put it on YouTube. That’s when I really know a song is going to be of some value."

Much more at The Advocate…