Minnesota GOP gubernatorial candidate Tom Emmer, whose opposition to same-sex marriage is well known thanks to a boycott of Target Corp. over its donation to a conservative PAC that funded ads for the conservative candidate, avoided commenting on the issue during a Friday night debate broadcast on Twin Cities public television, the Minnesota Independent reports: 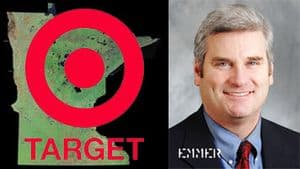 The question was requested by an anti-same-sex marriage group, according to host TPT’s Kathy Wurzer. Emmer has authored a bill for a constitutional amendment to ban same-sex marriage in Minnesota and has pushed against legislation that would give even a few rights to same-sex couples.

Wurzer interrupted Emmer, “But there are a lot of issues in a campaign…”

Emmer responded, “People are trying to distract us from what we have to do, which is get the economy…”

Wurzer interrupted again, “We spent the entire hour talking about the economy. Would you let voters… Do you think voters should vote on a constitutional amendment prohibiting same-sex marriage?”

Emmer finished with, “That would be up to the legislature.”

A Facebook group pushing the Target boycott has more than 62,000 supporters.