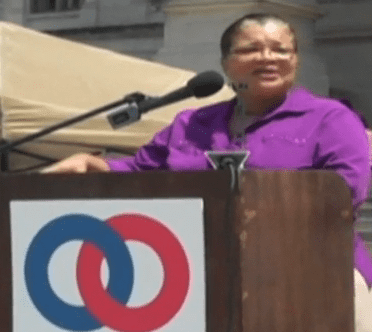 Even with an ever-growing population in the US and all over the world, King told the small crowd that humans could face extinction if gays and lesbians were allowed to marry.

"I come from a long line of Christian soldiers…we know that people of virtually every faith and culture agree that marriage is a union between a man and woman…marriage of a man and a woman remains the guard against human extinction."

Marriage equality supporters once again greatly outnumbered those of NOM's attendees – only 30 bigots showed up this time. By contrast, about 300 people supporting marriage equality counter-protested the event. One local NOM supporter said he was "so disappointed more people didn’t show up.”

NOM has faced low attendance at their rallies since the start of their tour, but, according to the GA Voice, Brian Brown is now saying that bigots are staying away because they feel intimated by the harassment they've faced from marriage equality supporters. As we've seen before, apparently blocking someone's view is what they consider harassment. Guess they're still painting themselves as victims.

Watch King's speech as well as a follow-up interview, AFTER THE JUMP.

Previous Post: « Watch: Eminem And Rihanna’s Video For ‘Love The Way You Lie’
Next Post: Prop 8 Proponents May Not Have Power to Appeal Judge’s Ruling »