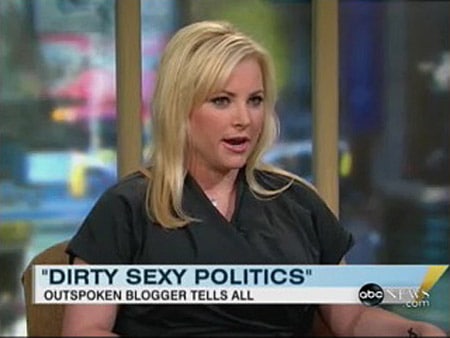 Meghan McCain speaks out for the first time about Sarah Palin and the effect she had on her father's failed campaign in an interview with George Stephanopoulos.

"In the book, McCain refers to Palin as 'the Time Bomb,' and calls her selection the very definition of the 'line between genius and insanity.' One area where McCain does not stumble is her take on Sarah Palin's 'disastrous' interview with CBS News' Katie Couric before the vice presidential debate, when Palin couldn't even state what newspapers she read. 'Katie Couric's interview with her before the vice presidential debate had been disastrous. Unhappy with her performance, Palin seemed to blame the interview on the campaign. And she continued to blame other poor interviews and snafus on the campaign too,' McCain writes. 'Sarah Palin. She was turning out to be somebody who leaves a wake of confusion and chaos — to the point of dizziness — wherever she went.'"

In related news, Palin is speaking at the GOP's Ronald Reagan dinner in Iowa next month, another sign she may be considering a presidential run.