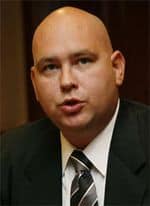 "There is a strong conservative case to be made in favor of gay marriage. Marriage is an institution that strengthens and stabilizes society. It is an institution that has the capacity to bring profound joy and happiness to people and it is a matter of equality and keeping faith of one of the charters of the nation, the right to live your life. More and more conservatives are saying that opposition to gay marriage would not be a litmus test for membership in the GOP. And more conservatives are making the case that no more do you want big government conservatives in the bedroom than big government liberals telling you how to live your life."

You may recall that Schmidt made headlines in September 2008 for a speech to the Log Cabin Republicans thanking them for their support of McCain (despite McCain's slate of anti-gay positions . This was followed up by Schmidt's full-on endorsement, in April 2009, of marriage equality at a speech to the same group.

But here's something I wish someone would ask Schmidt about — this bit from a 2005 GQ profile of blogger Mike Rogers by Jake Tapper:

"'Ken Mehlman is not gay,' insists Steve Schmidt, a senior official of the Bush campaign and a friend of Mehlman's, who refers to Rogers as a 'bottom dweller.'"

One wonders what definitive (but wrong) knowledge Schmidt had to make such an assertion about Mehlman, who was working hard to destroy (with anti-gay marriage initiatives and hateful rhetoric) the cause that Schmidt now seems to be championing.

Previous Post: « Watch: Meghan McCain Talks Sarah Palin
Next Post: Fidel Castro Takes Blame for Persecution of Gays in Cuba: ‘If Someone is Responsible, It’s Me’ »