MyFox Chicago reports on State Senator James Meeks, who is working "feverishly behind the scenes to become the African-American community's 'consensus candidate'" for mayor now that Daley has announced his retirement: 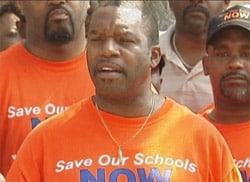 "As pastor of one of the South Side's largest congregations, Rev. Meeks believes homosexuality is morally wrong. He says that teaching comes from the Christian Bible and the revealed Word of God. He opposes abortion for the same reason. As chairman of the General Assembly's Black Caucus, Meeks has been one of the most influential foes of legislation proposed by gay rights activists and others."

FOX asks Meeks how he would deal with hate crimes, civil unions, and other gay rights issues.

Said Meeks: "Now, if I were sitting around bored with nothing to do, that stuff might come up. But I expect to be so busy with schools, crime and budget problems during my first term that I wouldn't have any time."