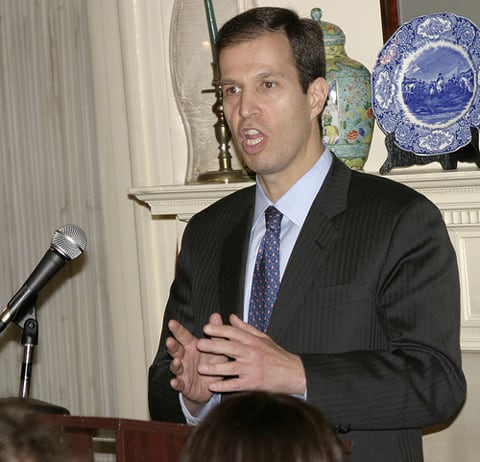 The answer is pretty simple.

In a follow-up to Republican Ken Mehlman's coming out last month, The Miami Herald has published a piece focused on reaction to the news by gays in both the democratic and republican parties.  The piece showcases the feelings by many gay republicans on how they're perceived by liberals in the LGBT community.

From the Herald aricle:

After Kenneth Mehlman, George W. Bush's 2004 campaign manager, came out as gay last month, he seemed to get way more grief from Democrats — who said a gay man would have to be a hypocrite to work to get a conservative Republican elected president — than moderate members of his own party, who basically shrugged and said: “Whatever.'' `In gay organizations and gay circles, most people don't understand how somebody can be gay and Republican,'' said Holland & Knight litigator Robert Watson, past president of the gay Log Cabin Republicans club of Miami. “It's been more difficult [for me] to come out as Republican in gay circles than as gay in Republican circles.''

The end of the article pretty much sums up, in a clear and obvious way, why gays and lesbians flock to the Democratic Party.

Miami Beach-based finance writer Andrew Tobias, a gay man who since 1999 has been treasurer of the Democratic National Committee, becomes furious when some gays say it doesn't matter which party is in power. `Even gay Republicans agree the Democratic Party is night-and-day better on gay issues. Dems in the House and Senate vote almost unanimously for our stuff; Republicans, almost unanimously against,'' Tobias said. “I'm sure most Republican congressfolk don't hate gays — they just don't want hate crimes protection extended to cover us or employment discrimination laws extended to cover us or Social Security benefits to our partners and children — or to allow us to serve in the military or to marry.