Yoann Lemaire, who played with the French football club Chooz, for 14 years has been rejected because he's gay. 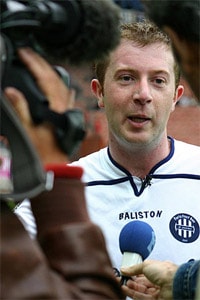 "In May 2009, some teammates made homophobic comments in front of a TV camera, and Lemaire took a sabbatical from the club. He has since asked to return to the club, and the team has refused. The rejection was signed by the club president, Frédéric Pretty. The rejection specifically refers to Lemaire’s sexuality and the 'trouble' it can cause as reason for rejection…Lemaire said in an interview that it was only two players (out of 60) on the team who don’t like that he’s gay. Instead of removing the hateful players, they instead decided to remove the gay player. Lemaire may have been part of a small club, but he was one of the more well-known players on that club."

The club also claims it has received online threats directed at Lemaire by the club's former chief.

Canadian Press reports that the French federation has been asked by a gay football club to place sanctions on the team:

"The Paris Foot Gay said Wednesday it asked the federation's national ethics council to impose sanctions on FC Chooz "to help the football world to realize that homophobia is as bad as racism and anti-Semitism…French Junior Sports Minister Rama Yade has also called for action to be taken against the club in eastern France."

And they wonder why footballers are hesitant to come out of the closet.