The President and his administration have made multiple attempts to highlight the nation's flailing academic status amongst the international community. "For years, we’ve recognized that education is a prerequisite for prosperity," said the President at the National Urban League Conference this summer.

"And yet, we’ve tolerated a status quo where America lags behind other nations. Just last week, we learned that in a single generation, America went from number one to 12th in college completion rates for young adults. Used to be number one, now we’re number 12." Why isn't the general public clamoring for more education reform?

Though the general American may not be impressed by news that 43% of transgender students and 13% of all LGBT fear for their safety on their respective campuses, if our nation's school systems can't accommodate LGBT communities, an ever-growing, ever-important demographic, then those schools are doing our nation a disfavor: a country can't thrive when such a large proportion of the population feels alienated from the education system.

The survey isn't all doom and gloom, however: Campus Pride also pointed to benefits of coming out on campus: "The 'more out' GLBT students reported more active and collaborative learning than their 'straight' and 'less out' peers." The lesson here: honesty truly is the best policy, even under trying circumstances.

Read the rest of this study at Campus Pride. 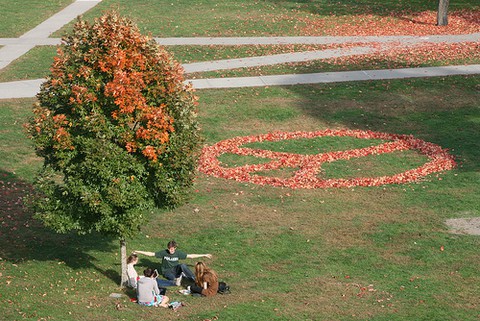 Many LGBT people see higher education as a place to come out, to spread their proverbial wings and explore a wide world without fear.

Unfortunately for many, that's not the case, for a new study from the non-profit Campus Pride shows that 23% of LGBT students, faculty and staff from colleges and universities have reported anti-gay harassment.

Just as worrisome: 33% of LGBT staff, faculty and students have almost left their institution over harassment or a "challenging climate," the survey reports, and "all GLBT students rated their campus environment less positively than did “straight” students." Many Americans, however, won't see this as a matter for national concern.