At a fundraiser for Harry Reid held at NYC Mayor Michael Bloomberg's townhouse, Reid apparently heaped praise on Senator Kirsten Gillibrand, but not before extolling her as a hottie: 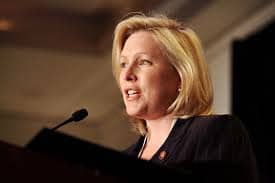 "First Bloomberg spoke, then Sen. Chuck Schumer, and then Reid, according to the sources. Reid praised Schumer at length, discussing how he could have run for governor – and won – in 2006, but didn't, and instead accepted the Nevada senator's entreaties to run the DSCC. Then he turned his attention to Gillibrand, saying something about how 'many senators are known for many things,' according to a source. He added, 'We in the Senate refer to Sen. Gillibrand as the hottest member.' He also then discussed her knowledge of securities law as extremely deep, and suggested she was better on certain policy elements than other people, according to the sources. Gillibrand was not among those who was asked to speak at the event, the sources said."

Previous Post: « Watch Rachel Maddow on McCain’s DADT Hypocrisy and the Vote
Next Post: Watch: Bristol Palin Debuts on ‘Dancing with the Stars’ »