"Unlike the Democratic and Republican Parties, the Libertarian Party believes that gays and lesbians deserve equal treatment under the law," the statement later asserts, before celebrating the party's mixed bag of inclusion: "black, white, young, old, straight, gay, Christian, atheist, yuppie, hippie, rich, poor, greedy, generous, eccentric and just plain average." It's quite a roster of adherents, yes, and one the party attempts to address with their platform's "personal relationship" clause.

"Sexual orientation, preference, gender, or gender identity should have no impact on the  government's treatment of individuals, such as in current marriage, child custody, adoption,  immigration or military service laws," the party's platform declares. "Government does not have the authority to define, license or  restrict personal relationships. Consenting adults should be free to choose their own sexual practices  and personal relationships." But political platforms don't always translate to real life, civic practice.

Many LGBT voters are rightfully angry with Democrats at the moment The Libertarians, despite their state's rights stance and "get government out" proclamations, tend to lean more right than left when it comes to what we refer to as LGBT equality.

On the matter of the Boy Scouts of America's persistent exclusion of gay scout leaders, Libertarians favor the Scouts, arguing that neither the government, nor civil society, should infringe a private, member-based organization, and their critiques of the Democratic party are right out of the Republican play book. Take a look at their DADT attack on Reid, whose "procedural no vote" they blame for this week's failed repeal.

The Libertarians write, "Reid claims he voted for [no] procedural reasons, but the whole situation seems calculated to look like they're trying to help, while making sure they don't actually help," while the LCR blasted Reid for "playing political games with the lives of the brave gay men and women serving in our military."

One thing's for sure: the Party's angle definitely got our attention. 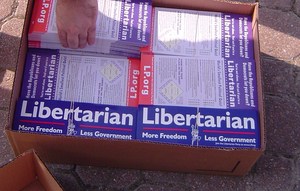 This nation's political parties are rapidly realizing that the "gay vote" matters and are stepping up their efforts to woo LGBT Americans.

It's no surprise, then, that the national Libertarian Party would also throw its hat in the LGBT ring. Their attempt, based on the "battered gay syndrome" that comes with voting Democrat, deserves, and earns, a double-take.

Highlighting the Democrat-led Congress' failure on gay equality, including its inability to overturn the Defense of Marriage Act and Don't Ask, Don't Tell, for which they hold Harry Reid accountable, the Party contends that gay voters must turn their backs on the party to break "battered gay voter syndrome."

"Like abused spouses who keep returning to their aggressors, gay voters keep handing their votes to the Democrats who abuse them," opens the statement. The next line echoes tones both of ex-gay and "blame the victim" sentiments: "The Libertarian Party (LP) wants to break this self-destructive behavior and offers LGBT voters a better alternative." Subtly isn't the party's strong suit, is it?