Minnesota's Catholic bishops are on the offensive against same-sex marriage, the AP reports: 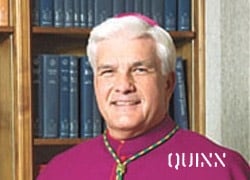 "Minnesota's Roman Catholic bishops are launching a new effort against same-sex marriage, with a DVD being mailed to parishioners in the next few days. Winona Bishop John Quinn writes briefly in the September issue of the diocese's newspaper, The Courier, that traditional marriage is under attack. 'The bishops of Minnesota are alarmed by the continuing attacks on the institution of marriage, and we are taking action,' he wrote. He wrote that in about a week Minnesota Catholics would receive the DVD, which would explain the church's teaching on marriage and describe the possible effects of allowing same-sex marriage in Minnesota. Chris Leifeld, executive director of the Minnesota Catholic Conference, the public policy arm of the church, said the DVDs would be distributed throughout the state's six dioceses. He declined to comment about the campaign until the formal announcement later this week."

Previous Post: « Cheyenne Jackson on ‘Glee’ Role: I Was Almost Cast as Mr. Shue
Next Post: Watch: The Saint, Remembered »