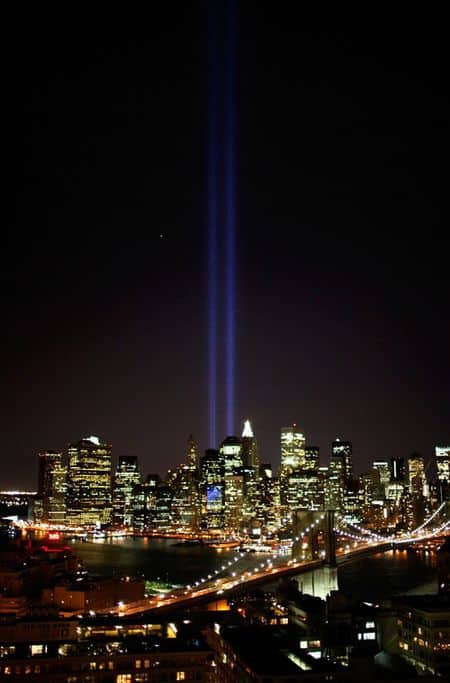 Hard to believe but it's been nine whole years.

Tribute services were held this morning at Ground Zero, the Pentagon, and Shanksville, Pennsylvania. Next year, on the 10th anniversary of the attacks, a memorial will open honoring those killed on 9/11 and in the 1993 bombing of the towers at Ground Zero.

A review of the elaborate memorial:

The most important sight at ground zero now is Michael Arad’s emerging memorial. The shells of two giant pools are 30 feet deep and are set almost exactly in the places where the towers once were.

The huge waterfalls around the sides, the inscribed names of victims and the plaza are promised by the 10th anniversary next year. But two 70-foot tridents that were once at the base of the twin towers were installed last week. The museum will be built around them by 2012. And the first 16 of 416 white swamp oaks were planted on the eight-acre surface.

Surrounding that memorial will be a ring of commercial towers — eventually to be filled with workers, commuters, shoppers, tourists, the full cacophony of New York City. The tallest skyscraper is now a third of the way up. The developer Larry Silverstein has one of his skyscrapers taking shape — this one by the Japanese architect Fumihiko Maki. The bases of two more are finally beyond the planning stage.

It's too bad some people are more concerned with burning Korans rather than remembering the fallen in a less hateful way. By the way, Terry Jones has decided to call off the Koran burning for good but now The Westbore Baptist Church plans to burn at least one copy of the book today.

Previous Post: « Who Is Judge Virginia Phillips?
Next Post: HRC May Focus On Bringing Marriage Equality To Minnesota »