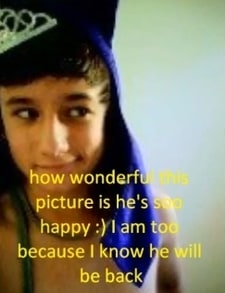 Police in Tehachapi, California, will not pursue charges against students who taunted and bullied 13-year old gay student Seth Walsh, who hung himself nine days ago and was taken off of life support yesterday.

"Several of the kids that we talked to broke down into tears," said police chief Jeff Kermode. "They had never expected an outcome such as this." Other students remain in shock over Walsh's tragic death, and seem to understand that homophobic bullying played a role in Walsh's suicide, yet that doesn't mean they'll break what prevention counselor Daryl Thiesen calls the "culture of silence" that surrounds bullying.

"You're told you shouldn't be a snitch or tattler," said Thiesen.

These incidents are not isolated, America. This isn't a gay problem, nor are these stories just about nasty brats.

We're experiencing an anti-gay bullying epidemic, and one that needs to be addressed, for the aforementioned culture of silence isn't just killing kids, it's killing our nation's future.

We should all heed the Walsh family's statement on the subject: "A negative action … by adults and children … will not solve or help anyone! Violence is not the answer! Please everyone, be kind and love one another!"

I've included a video made by Walsh's family and friends, AFTER THE JUMP. Be warned, however, that the video will yield tears. So, if you don't want to be puffy at work, wait until you get home.

Previous Post: « Musician Uses Tunes To Blast Gays. Haven’t We Already Heard This Song?
Next Post: For Some Levity, A Pink Hippo »