In July 2009, I posted a mesmerizing, emotional video of New York State Senator Thomas Duane delivering a 3 am speech in support of a bill preventing people living with HIV or AIDS and receiving public assistance from having to pay more than 30 percent of their monthly income on rent. 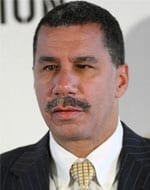 The bill passed, and made its way through the proper channels to Governor Paterson's desk, where he vetoed it this weekend, saying it was unclear where the money would come from to pay for it.

“This is my most difficult veto. I recognize, sadly, the history of the inadequacy of services government has brought to bear for those with H.I.V./AIDS. I have pledged not to impose unfunded mandates on cash-strapped localities, and to prevent the state from taking on additional financial burdens outside the budget process without an identified funding source.” 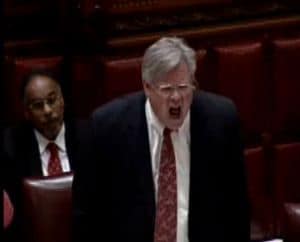 "Governor Paterson’s veto of the HIV/AIDS Services Administration (HASA) 30% rent cap bill is an incredible tragedy. Thousands of New Yorkers living with HIV/AIDS who receive housing assistance from HASA will continue to be forced to live on $11 and change a day because all the rest of their monthly income — in some cases upwards of 70% — must go towards paying rent. While people in all of New York's other rental assistance programs have their rents capped at 30% of income, these women and men will continue to worry about how they are going to survive each month instead of focusing on staying well. It is inexcusable that New York would make these people who are ill decide between buying winter gloves or underwear, between buying toilet paper or a Metrocard to get to a doctor's appointment, between buying toothpaste to brush their teeth or laundry detergent to wash their clothes. This veto takes away these HASA clients’ ability to afford fresh fruit and vegetables to maintain their strength and to purchase over-the counter medicine at the drug store when they have a cold. Affording a telephone and electricity is a struggle and buying stamps to send a letter to loved ones is cost prohibitive. Even simply going to a movie or taking the subway to the park to escape the pressures of life for a few hours is impossible. This is an incredible injustice and it is shameful that New York will allow this to continue.

…There was no valid reason to veto this bill. Time and time again I, Assemblymember Deborah Glick, and so many other elected officials have proven that this legislation is cost-effective for the City and State. Mayor Bloomberg aggressively lobbied against the legislation claiming it would cost the City of New York $16 million dollars. Yet a cost analysis conducted by Shubert Botein Policy Associates projected a savings of over $19 million from prevented housing evictions. Inexplicably, under extreme pressure from Mayor Bloomberg, the Governor decided to ignore this solid evidence and vetoed the bill. HASA clients: The Governor and the Mayor let you down. Your hopes were raised when both the Senate and Assembly passed the legislation in overwhelming numbers. You traveled to Albany week after week, telling your stories and providing hard data time and time again. “We have lost this chance to right this wrong but you have my pledge to continue the fight."

Watch Duane's amazing floor speech from 2009, AFTER THE JUMP…