Obama has been heckled over AIDS and quicker action on DADT at a fundraiser this evening at the Roosevelt Hotel in New York, the AP reports: 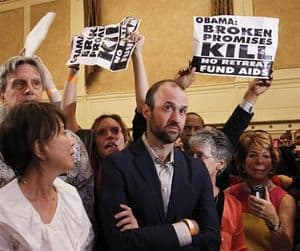 "Activists yelled slogans and held signs aloft reading 'Obama broken promises KILL.' Supporters of the president tried to drown them out with shouts of 'O-bam-a! O-bam-a!' The hecklers were so raucous Obama went off-script several times to address them, insisting he's increased AIDS funding and is working to overturn the military's "don't ask, don't tell" policy. He told them to go shout at Republicans, noting that a vote on repealing "don't ask, don't tell" failed this week in the Senate, with Republicans united in opposition. 'Some of those signs should be going up at the other folks' events, and folks should be hollering at the other folks' event. Because the choice in November could not be clearer,' the president said. Addressing an activist pushing for more funding for global AIDS initiatives, the president said, We heard your point. And as I said before, we increased AIDS funding. … The people who will take over if we don't focus on the election, I promise you, will cut AIDS funding.'"