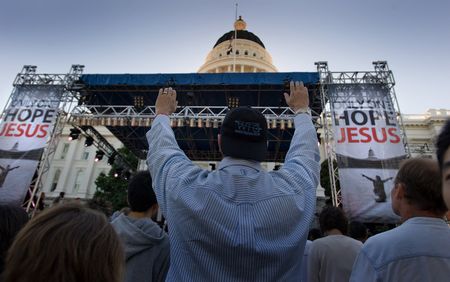 Controversial minister Lou Engle has held several religious, anti-gay gatherings called Call to Conscience, all over the country. He held another Call, which are supposed to bring holiness and purity, or something like that, back to America, in Sacramento yesterday. The event drew 15,000 people, including Mike Huckabe, who asked God to forgive America for abortions, pornography and, of course, marriage equality.

The AP reports on the hate-filled event:

The Sacramento event, Engle said, helped to highlight immoral laws being passed out of the Capitol and called on traditional marriage to be restored.

"If marriage is going to be upheld between a man and a woman, which we believe is the best for families and children and society, then right now, it seems we need divine intervention," Engle said in an interview between appearances on stage. "That's part of the reason we're coming here, to pray, but also to take a stand and be a prophetic voice to stand for truth."

The Sacramento Bee describes some of the hateful speakers and their reaction to the recent prop 8 ruling from Judge Walker.

Among the speakers was Tony Perkins, a leader of the religious right and head of the Washington lobbying group the Family Research Council.

"If (the ruling) stands, in one generation we will have gone from banning the Bible in public schools to banning religious beliefs in society," Perkins said.

According to the Bee, those attending the Call also prayed for bisexual women and middle-aged men who play video games.