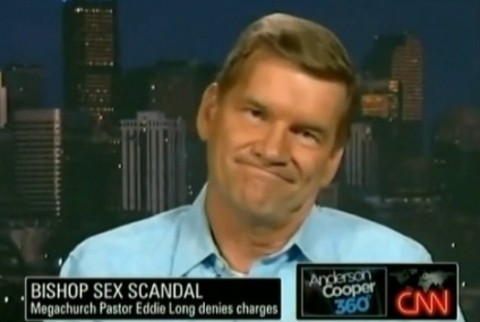 Ted Haggard's ongoing defense of Eddie Long, the pastor accused of coercing three congregants into sexual relationships, brought him to Anderson Cooper's CNN show last night. It was quite a performance, particularly when Haggard attempted to explain away Long's muscle shirt photos.

"Well, we know the pictures are there. We're not sure where they came from," said Haggard. "But there was a movement several years ago where people were concerned about the direction of the church. And there was kind of a masculine movement. Pastors are more masculine sometimes in certain churches; that doesn't mean he's guilty."

Haggard, who was infamously run out of his Colorado Ministry after admitting to hiring a male prostitute, and recently started a new "gay-friendly" congregation, was later asked whether he found Long, who has called homosexuality a "spiritual abortion," to be homophobic. Haggard's reply? A round-the-way defense of anti-gay churches.

"Well," began Haggard. "The times I met him I didn't get that indication. But I do think it's important that churches be able to embrace the type of theology that they believe in and be able to communicate it with clarity."

Pastor Troy Sanders from the LGBT-inclusive, religiously-inclined group Soul Force, which met with Long in 2008, had a different take on Long's gay stance: "The first impression that I had was very hospitable to us but it was very clear that there was a difference in theology. Like there was a very clear difference between what we believed and the oppressive theology that the church is known for.

Watch the conversation, AFTER THE JUMP.