Here's the trailer to Out in the Silence: 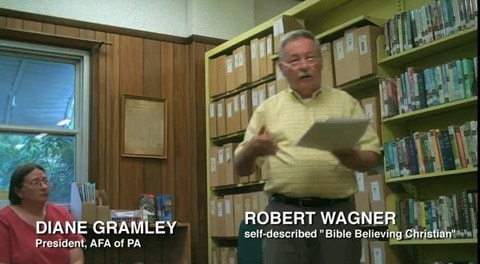 Check out this archaic assemblage of bigots at Coudersport, Pennsylvania's public library at a presentation meant to counter the screening of Out in the Silence, a documentary by filmmaker Joe Wilson about what it's like to be LGBT in a rural Pennsylvania town (Wilson's subject was Oil City, PA, his hometown, two hours away). 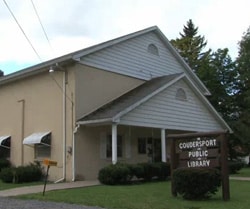 Wilson had screened Out in the Silence a month before the presentation you're about to see here, to a standing room only crowd and faced fierce opposition from the local Tea Party and Dr. Robert Wagner, who speaks in this video.

Behind Wagner, is Diane Gramley, President of the Pennsylvania Chapter of the American Family Association, and a resident of Oil City who plays a central role in Wilson's film for opposing Wilson and his partner's same-sex marriage announcement in the local paper.

During Wagner's presentation, called "A Bible Believing Christian's Response to OUT IN THE SILENCE", he discusses his feelings toward transgender people: 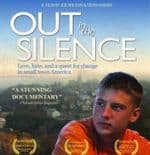 "I'm gonna put a ball bat in my car, and if I ever see a guy (transgender individual) coming out of a bathroom that my granddaughter's in, I'm gonna use the ball bat on him…In the good old days, before 'she-males' existed, they just called such people perverts."

When Wilson discusses the American Family Association's Bryan Fischer and his views that gays should not be allowed to hold public office, he receives a round of hearty "amens" from the crowd.

Watch Wilson's film of Wagner's presentation, which he and his partner Dean Hamer traveled there to witness, AFTER THE JUMP…

Previous Post: « The Wilderness Downtown
Next Post: Matthew Mitcham: Gay Footballers Should Come Out of the Closet »