That's what Prop 8 proponents are hoping, in a last-ditch effort, Think Progress reports. 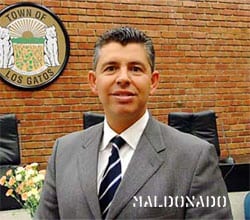 "A group of conservative leaders led by former attorney general candidate John Eastman have asked to meet with Lieutenant Governor Abel Maldonado to discuss his support of an appeal in a federal court suit regarding Proposition 8.

While the Ninth Circuit Court of Appeals has scheduled a December hearing of a lower court’s decision overturning the voter approved initiative, there is some question whether the proponents of the measure have standing to argue the case before the court. The Attorney General and the Governor clearly have authority to file the appeal. But, both Jerry Brown and Arnold Schwarzenegger have refused to do so based on their personal opposition to Proposition 8.

'But Abel Maldonado is a supporter of Proposition 8 and hopefully more willing to honor the obligations of his office than the current Attorney General has been' says Eastman. 'Importantly, while the Governor is traveling outside of the State, all of the rights and responsibilities of the office of Governor rest with Mr. Maldonado.'"

Eastman, who is best know for inventing wildly wrong theories of the Constitution supporting right-wing policy goals, is uncharacteristically correct about Lt. Gov. Maldonado’s temporary authority. Under the California Constitution, “The Lieutenant Governor shall act as Governor during the impeachment, absence from the State, or other temporary disability of the Governor or of a Governor-elect who fails to take office.” Thus, because Schwarzenegger is currently on business in China, Maldonado does have the authority to file an appeal that the governor objects to.

It’s difficult to imagine that Maldonado would actually do such a thing, however.

Nevertheless, the anti-gay activists offer one entirely cynical reason for Maldonado to abuse his temporary powers as acting governor: the upcoming election. As one anti-gay activist puts it, “more than a few conservatives are still angry with the Lieutenant Governor for votes while he was in the California Legislature. The simple act of filing this appeal could wipe away many bad memories.”