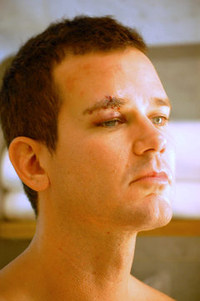 Matthew Francis, one of the men accused of attacking Ben Carver, pictured, at the Stonewall Inn last week, refuses to apologize for his alleged actions, because he has no regrets.

"I'm not going to say sorry, because I don't know what I should be sorry for," said Francis, who also insisted he's not a homophobe. "I don't hate gay people. I don't hate anybody."

According to target Carver, however, Francis and his friend, Christopher Orlando, asked him whether he was gay and then allegedly used that as an excuse to pummel him. And, not surprisingly, Carver's astonished by Francis' latest remark: "I'm very surprised to hear that. [Francis] was the one who was hitting me, and then the other young man was the one who pinned me."

Francis, meanwhile, has decided to use his lesbian sister as part of his defense: "I'm not a thug," he said. "My sister's a full-blown lesbian." Not like those half-blown lesbians…