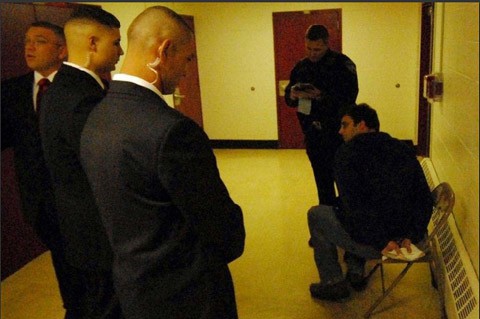 "Tony Hopfinger was handcuffed by the guards and detained in a hallway at Central Middle School until Anchorage police came and told the guards to release Hopfinger. Hopfinger has not been charged but the owner of the Drop Zone, the private security firm that's been providing Miller's security, accused Hopfinger of trespassing at the public event, a town hall sponsored by the Miller campaign. The owner, William Fulton, also said Hopfinger assaulted a man by shoving him. Anchorage Police who responded to the call said they would leave it to the District Attorney's office to decide whether to prosecute. They spent more than an hour taking statements, then left."

"While Hopfinger was still in handcuffs, the guards attempted to prevent other reporters from talking to him and threatened them too with arrest for trespass. A Daily News reporter interviewed Hopfinger anyway. No other reporters were arrested, though a few shoving matches and chest bumps ensued as the guards attempted to cordon off Hopfinger and block photographs and videos from being taken of the bizarre school scene."

DailyKos reports that Hopfinger was trying to question Miller about his ethics, and that last week…Miller said that "he will no longer answer reporters' questions about his background and personal life."

Watch a brief clip of the action going down, AFTER THE JUMP…