The New York Times profiles Ann Coulter in a new piece today. Sounds like she was interviewed on the day of her speech at Homocon last month (“I wrote a new speech for the gays and I don’t have it memorized yet!” she says). 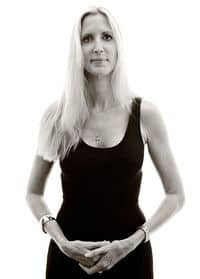 Coulter who reveals something very few people experience – how it feels it be hated by so many people:

On a recent Thursday, after a late taping of “The Sean Hannity Show,” Ms. Coulter sounded almost weary discussing her critics. “It was more fun when I was lesser known,” she said. “The rule of the road is you never attack down, you always attack up. Now I have all these peons attacking me and I have to not respond. And it’s fun to respond.” She said she recently got an e-mail from a friend who was chastised for taking a public position on a Christian issue. “He said, ‘How do you get used to being hated by so many people?’ ” Ms. Coulter said.

She had some trouble with her reply. “My first paragraph was bubbling over with how fun it was to be hated by liberals,” she said. “And then I realized, at the end of it, maybe I am getting too into being hated by liberals.”