Over the weekend, Steve posted about Colorado GOP Senate candidate Ken Buck's Meet the Press remarks comparing homosexuality to alcoholism. Here's some reaction from the wingnuts. 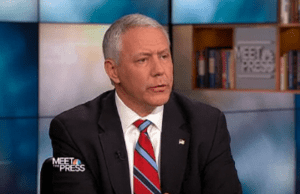 Right Wing Watch reports that Focus on the Family is defending Buck, saying he is absolutely right:

Bennet said on “Meet the Press” Sunday that Buck saying homosexuality is a choice and his drawing an analogy between it and the disease of alcoholism are “outside the mainstream of views on this.”

But Buck’s views are closer to the mainstream in Colorado Springs. For years conservative Springs ministry leaders have compared alcoholism to homosexuality.

Jeff Johnston, Focus on the Family social policy analyst, said Monday, “Alcohol affects your whole body, and so does sexual behavior. The highly addictive (aspect of both) is an apt comparison.”

In related news, on The Ed Show in a discussion of Buck's remarks., Former GOP Congressman Ernest Istook agreed with Ken Buck, saying gay activists say gay is a choice "because it improves their legal position."

Previous Post: « Towleroad Guide to the Tube #755: It Gets Better Edition
Next Post: Military Instructs Recruiters to Accept Gay Applicants »