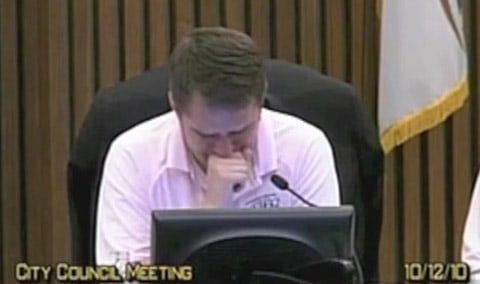 Fort Worth City Councilman Joel Burns broke down at last night's City Council meeting during an emotional personal statement about his own taunting by anti-gay bullies as a teen.

"I was cornered after school by some older kids who roughed me up. They said that I was a fag, and that I should die and go to Hell where I belonged."

Burns went on to discuss meeting his partner, getting elected, and developing a bond with his dad, promising teens, "It gets better."

Writes The Victory Fund: "Burns became the first openly gay candidate elected to public office in Tarrant County, Texas, when he won a special election for a seat on the Fort Worth City Council in 2007.  He was reelected in 2009."

Previous Post: « Gavin Rossdale Says He Experimented with Gay Sex, Calls it ‘Part of Growing Up’
Next Post: Facebook Steps Up Monitoring of Anti-Gay Hate Speech »