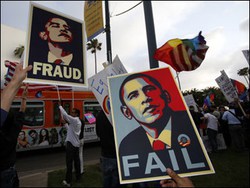 With the good news that Judge Virginia Phillips ruled Don't Ask, Don't Tell unconstitutional comes the bad news that the Obama Administration has filed appeals against another judge's decisions to overturn the Defense of Marriage Act.

U.S. District Court Judge Joseph Tauro of Boston ruled in Gill v. Office of Personnel Management and Commonwealth of Massachusetts vs. Department of Health and Human Services earlier this year that DOMA violates the Fifth Amendment and impedes the state of Massachusetts's ability to define marriage.

While the Justice Department's appeal comes as no surprise, it will do nothing to endear the President to liberals and progressives offended by broken campaign promises.

For their part, Justice Department officials insist they're just doing their job, and reassured a potentially angry public that the President is dedicated to ending DOMA."The Justice Department is defending the statute, as it traditionally does when acts of Congress are challenged," said the Department in its statement. "As a policy matter, the President has made clear that he believes DOMA is discriminatory and should be repealed. The Department of Justice has a longstanding practice of defending federal statutes when they are challenged in court…"