Sorry not to have the Ellen footage. The only video currently available doesn't come with embed code. 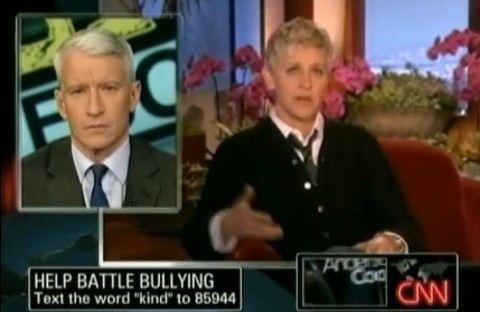 Anderson Cooper and Ellen DeGeneres may very well be the next television power couple.

The hosts have both used their respective platforms this week to highlight the plight of bullied teens. Now they've combining their powers for the greater good: Cooper appeared on Ellen's daytime talk show, and she in turn appeared on his CNN news show.

While on CNN last night, Ellen told Cooper how her own experience with bullying and anti-gay jokes helps her empathize with people like Tyler Clementi, the Rutgers University student who committed suicide last week:

When these things happen, it feels like a direct assault on me, because I am that person that they are bullying. I am that person that — that feels like committing suicide. They're talking about me. I'm gay, and I have been ostracized my whole life and in society. And I'm sent that message on a daily basis by the media, and — and it hurts. And I want to say to those kids out there I have been through it. I came out. I am successful. I am happy. I am in love, and there is Hope.

Cooper also spoke last night with teens who have been bullied. One participant explained what it was like being taunted for his sexuality: "I believed that I did not deserve to live." Heartbreaking.

Cooper's week-long look into bullying concludes this Friday with a town hall meeting that will appear on both CNN and the Cartoon Network. Cooper's power knows no network's bounds. Nor does Ellen's. Has the power vacuum created by Oprah's daytime departure been filled?

Watch DeGeneres' appearance on AC 360, AFTER THE JUMP…

Previous Post: « Priest Blasts MN Archbishop’s Anti-Gay DVD Plot, Likens It To Bullying
Next Post: ‘Jewish Standard’ Publisher: ‘We May Have Acted Too Quickly’ With Gay Announcement Ban, Will Reconsider »