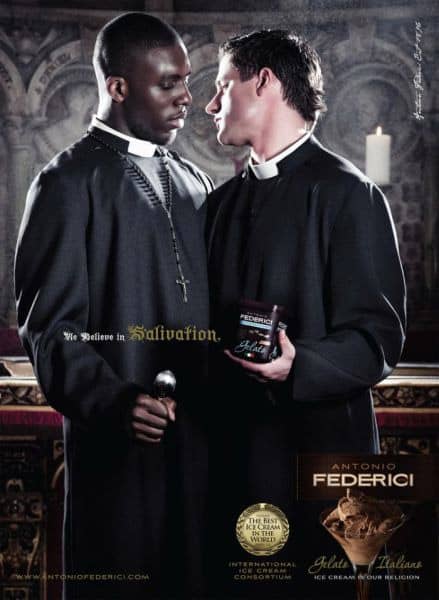 Remember this ad I posted back in September, which was part of a campaign that hit UK streets before the Pope's visit? At the time, a poster of a pregnant nun was being banned for mocking Roman Catholic beliefs.

It was replaced by the gay priest poster, which has received the same denunciation.

Defending the advert, the company said it did not mock Catholicism but ''reflected the grave troubles they considered affected the Catholic Church''.

Antonio Federici was a Catholic company, but would continue to produce advertising that challenged the Catholic Church while it believed it remained troubled, it added.

Upholding six complaints about the ad, the ASA noted the ad used the text ''We Believe in Salivation'' in reference to the taste of the product and to the image of the priests.

The ASA said: ''We considered the portrayal of the two priests in a sexualised manner was likely to be interpreted as mocking the beliefs of Roman Catholics and was therefore likely to cause serious offence to some readers.''

It ruled that the ad must not appear again and told Antonio Federici to ensure future ads were not likely to cause serious or widespread offence.

Honestly, if they really wanted to "mock" the Catholic church and reflect its grave troubles they would have replaced one of the models above with a boy.