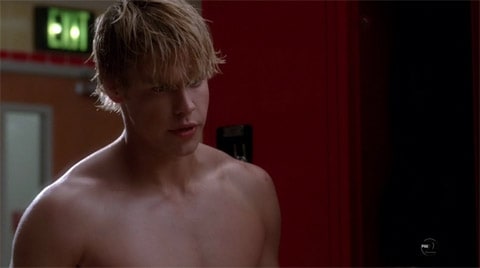 New Glee cast member Chord Overstreet, who plays the high school quarterback, talks about how the show is making him spend more time out of his clothes than in them.

"It's funny. They have me in the shower with my shirt off for every episode. You kind of have to stay in good shape. I actually signed that in my contract. It was all about having to have one or two shirts off scenes for every episode. I'm like the Taylor Lautner of TV now." 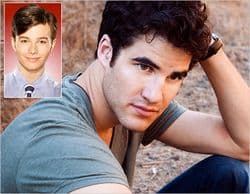 It's been rumored that Overstreet will be developed into a boyfriend for Kurt Hummel, however, new cast member Darren Criss is the one, Michael Ausiello reports:

"The two meet in the Nov. 9 episode when Kurt, who is fast becoming fed up with life at McKinley High, considers transferring to the nearby Dalton Academy, where Criss’ character is a student. 'I think Blaine’s most important role is…as a mentor to Kurt,' says Criss, whose only major pre-Glee TV credit was a stint on ABC’s short-lived Eastwick. 'At this point, Kurt’s [sexuality] has been such a sense of discord in his life. Blaine finds [being gay] empowering. He embraces who he is, and sees Kurt [struggling with] the same things that he had to deal with, and I think he wants to impart that knowledge.'"

The preview for the Halloween "Rocky Horror" episode, in which Overstreet is once again shirtless, AFTER THE JUMP… 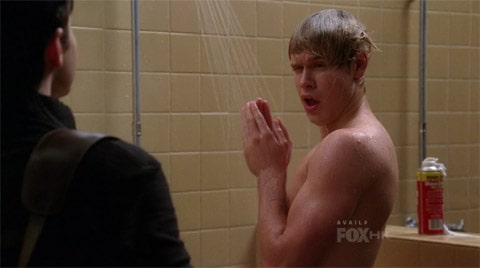