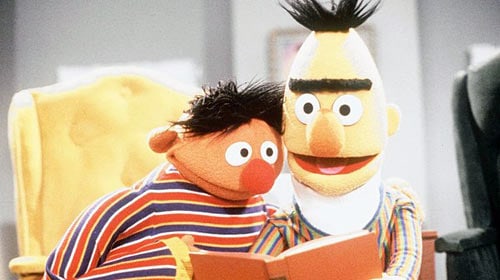 The LA Times today published an interesting article on the seemingly more gay-friendly attitude of this season of Sesame Street. While a Sesame Street spokeswoman says that "the idea that anyone would interpret [this season] that way never crossed our minds," apparently some viewers think otherwise.

From the LA Times article:

In its own subtle, perhaps unintentional way, the show's latest season feels more LGBT-friendly than ever. Lesbian comedian Wanda Sykes appeared on the show in October, following in the tradition of openly gay guest stars such as Neil Patrick Harris, who played ( cough, cough) "the shoe fairy" a few seasons back. A parody of "True Blood" — the HBO vampire drama that features several gay characters and draws many gay fans — aired in September. Recently, the Black Eyed Peas frontman will.i.am appeared on the show to sing "What I Am," a song about accepting who you really are, prompting much online debate about its underlying message. "Did Will.i.am just sing the next gay pride anthem on Sesame Street?" one commenter on AfterElton.com asked.

GLAAD weighs in on the discussion:

For Jarrett Barrios, president of the Gay & Lesbian Alliance Against Defamation (GLAAD), "Sesame Street" is simply reflecting its changing audience. "As more and more loving and committed gay and lesbian couples begin families, it's important that their children see representations of their families on their favorite shows," he says. "'Sesame Street' has a long history of teaching children about diversity and acceptance, and I don't expect that our community will be left out of that education.

The piece also makes note of this summer's cryptic "mo" tweet from Bert (did he or did he not come out?).