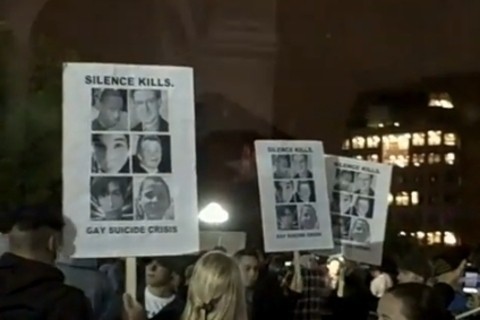 Hundreds of people in both New Jersey and New York gathered last night to remember Tyler Clementi, the Rutgers University student who committed suicide last week after two of his classmates transmitted his sexual encounter over the internet.

In New Jersey, where the school's based, students and faculty gathered to commemorate their peer, and Rutgers President Richard McCormick described the school's vigil as "an opportunity to reaffirm our commitment to the values of civility, dignity, compassion and respect for one another."

Meanwhile, across the river in the Big Apple, City Council Speaker Christine Quinn, who's a lesbian, told supporters to "send a message to those ignorant individuals that they're not in the mainstream."

Outgoing Gov. David Paterson, meanwhile, used the opportunity to promise legislation aimed at cyberbullying. Whether he has time to enact such a vow remains uncertain, especially since Albany's famously dysfunctional. Still, it would be a great platform for Democratic gubernatorial hopeful Andrew Cuomo who, as the New York Times pointed out this weekend, hasn't done nearly enough for when it comes to gay rights:

He could have pursued more civil rights cases [as state Attorney General], and he remained virtually silent on the same-sex marriage bill when his voice might have made a difference in the State Senate debate. Now that he is the Democratic candidate for governor, he should explain to voters how he plans to press that fundamental right forward…

I've included footage from the rallies, AFTER THE JUMP….