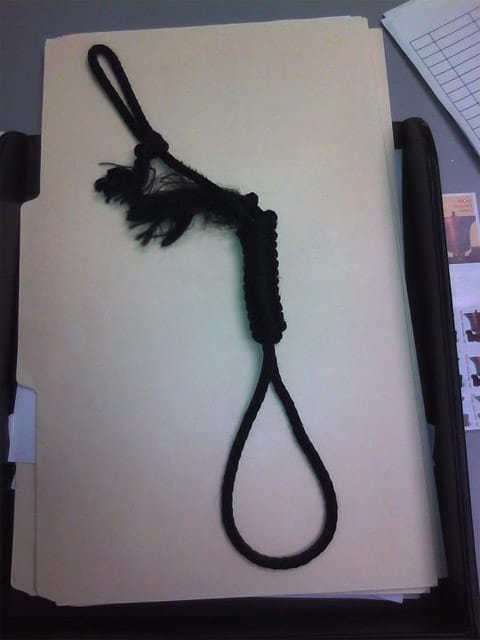 Mel Distel, a 25-year-old volunteer at Equality California's Santa Ana branch reports that she arrived at work last night to find a noose hanging on the door of the office. 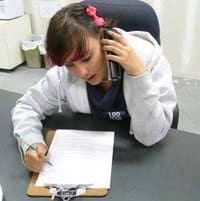 Wait till you hear what the police officers she called had to say:

When the police arrived, two officers spoke to Daniel and myself outside.  The male officer dominated the conversation.  There was nothing they could do, of course, there was no suspect and no crime had been committed. The officer said "what it is, is a string on a door."  My vision got blurry, I was embarrased and felt stupid for making the call.  I took a deep breath and said "Do you see any correlation between the fact that this is a gay office and there was a noose left on our door in the wake of all of these teen suicides?"  The officer said, "Sometimes you just have to live with being a victim," and proceeded to mention that his car had been broken into before. As if that's the same. As if having your stereo stolen is anything like the message "You should kill yourself."  As if random theft is anything like an act meant to convey hate and stir up fear in the heart of a minority group.

I want to thank Karla for having a long discussion with the sargeant about the situation.  No, it was not legally a hate crime, because there was no crime (just hate). And the officer likely did not intend to come off the way he did.

But I'm still in shock.  I pray that no officer ever tells a bullied teen that, "sometimes you just have to live with being a victim."  The officer made me feel foolish for being shocked and afraid.  I feel stupid and unjustified.  Our volunteers felt hurt, angered and confused.

I am so grateful for the excellent family of volunteers who came together tonight, supported eachother, worked through their emotions, and even made an astonishing number of phone bank calls.

I am sorry for anyone who has experienced hate or intimidation, and my heart goes out to anyone who has reported it and been made to feel stupid for reaching out for help.