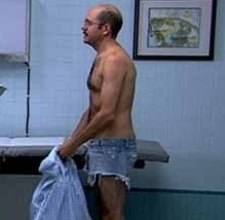 While the rest of the nation's worried about the economy, two wars and an upcoming election, officials in Santa Fe, New Mexico, have been tackling an even greater problem: public nudity, and last night expanded on the city's definition of what's nude and what's not:

The definition comes after parents complained about the annual World Naked Bike Ride, which they say corrupted their children.

I suppose it's a good thing I stumbled onto this story, for I'm spending the next six months living in Santa Fe and now I know that "turgid" male genitals aren't meant for public consumption. Because, you know, common sense isn't enough to make that clear.

[Image Note: To answer a reader's question, yes, that is David Cross, and the image comes from his time on Arrested Development. His character was a "never nude," a person who is, well, never nude.]