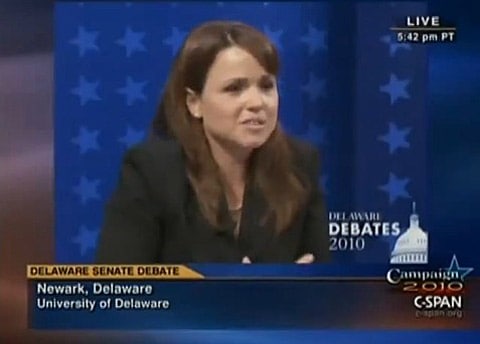 Here's what she had to say (via The Wonk Room):

"A federal judge recently ruled that we have to overturn Don’t Ask Don’t Tell. There are a couple of things we need to say about that. First of all, judges should not be legislating from the bench. Second of all, it’s up to the military to set the policy that the military believes is in the best interest of unit cohesiveness and military readiness. The military already regulates personal behavior in that it doesn’t allow affairs to go on within your chain of command. It does not allow it you are married to have an adulterous affair within the military. So the military already regulates personal behavior because it feels that it is in the best interest of our military readiness. I don’t think that Congress should be forcing a social agenda on to our military. I think we should leave that to the military."

During another moment, O'Donnell was asked if there have been recent Supreme Court opinions to which she objects. O'Donnell was stumped:

Um, I'm very sorry, right off the top of my head, I know that there are a lot, but I'll put it up on my website, I promise you."