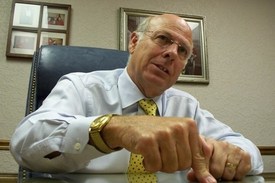 Sarah Palin has lent her name to another congressional race, this time for Rep. Steve Pearce.

Palin did not, however, mention that fact that Pearce has publicly wondered whether President Obama's an American citizen.

"My position is that Barack Obama raised the most significant questions himself. He said, after he came to the U.S., that he traveled to Pakistan. Now at the point that he traveled to Pakistan it was not legal to go there with a U.S. passport. And so he, himself, raised the greatest questions. I think that those questions need to be asked," said Pearce after being asked whether he would subpoena the President's birth certificate.

In addition to weighing the Birther debate, Pearce has spent his time in office comparing gay marriage to polygamy, which he did in during a 2008 campaign stop.