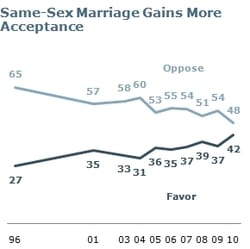 Yesterday I noted how Exodus International, an "ex-gay" group, has dropped out of the homophobic "Day of Truth."

Though the news seems small, Exodus' departure signals, I said, the erosion of social conservatism's power in America. If you want more proof of the nation's gay evolution, check out this news from Pew Research:

Polls this year have found that more Americans favor allowing gays and lesbians to marry legally than did so just last year.

In two polls conducted over the past few months, based on interviews with more than 6,000 adults, 42% favor same-sex marriage while 48% are opposed.

In polls conducted in 2009, 37% favored allowing gays and lesbians to marry legally and 54% were opposed. For the first time in 15 years of Pew Research Center polling, fewer than half oppose same-sex marriage.

While it can be distressing to live in a nation that restricts rights based on people's sex lives, this latest report, coupled with Exodus' exodus, suggests that there is indeed a light at the end of the tunnel. An inclusive America is on the horizon, inevitable, and our virtuous patience will be paid in spades. Or, rather, in marriage.

Previous Post: « Iowa Politico Blasts State Justices Who Approved Gay Marriage
Next Post: What Do You Do When You’re Ill? »