23-year-old Lewis and Clark graduate teaching student Seth Stambaugh claims he has been discriminated against while on an assignment as a student teacher at an elementary school in the Beaverton, Oregon Student District. This comes after a second complaint from a parent who had initially already complained about the way Stambaugh was dressed. What was he wearing at the time? According to Oregon Live, "pressed pants, an oxford shirt, a tie and a cardigan. Stambaugh has a light Van Dyke and pulls his hair back into a pony tail." Stambaugh is represented by an attorney, Lake Perriguey. 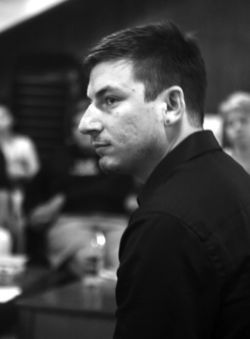 The Portland Mercury details the second complaint by the very same parent:

Later in the week, Stambaugh was leading a journaling activity in the classroom when one of the students asked whether Stambaugh was married. Stambaugh said he was not and, when the student asked why, replied that it would be illegal for him to get married because he "would choose to marry another guy." The student pressed further, asking if that meant Stambaugh liked to hang out with guys and Stambaugh responded, "Yeah." That was the end of the conversation.

After that, says Perriguey, word of the short conversation apparently got back to parent who had previously complained about Stambaugh's appearance. The parent called the school and threatened to remove his child from the classroom.

On September 15th, the principal of Sexton Mountain called the Beaverton School District and told them that Stambaugh was barred from teaching in the district. Stambaugh was told that the comments he had made about his marital status were "inappropriate."

"There's no factual dispute about what happened," says Stambaugh. "The question is whether we tolerate what happened in this state and this culture."

What makes this even more sad is that Stambaugh is of course teaching for the same reason most people do and it's not for the low pay. He said about teaching: "The long hours, the tiring days, they paled in comparison to the sheer energy I got from being in that classroom."

Lewis & Clark says that Stambaugh was dismissed from the school in Beaverton by the school district and though they would have welcomed a conversation about the incident, none was offered.

Thanks to reader Ms. B, here's the contact information for the school: