"In our nation, as in nearly every culture and religious tradition, proper burials play a crucial role in helping the bereaved mourn the dead," declare 42 politically opposed Senators, like Harry Reid, Mitch McConnell and Al Franken. "The disruption of a funeral interferes with the necessary emotional process of grieving, and thus can inflict severe psychological and even physical distress on the bereaved. In recognition of the vulnerability of mourners, American courts have long recognized a 'right' to a decent burial."

As proof of this legal note, the Senators point out that Congress, as well as 42 states, have already enacted laws denoting which times and places people can demonstrate outside of funerals. These laws are not, they insist, contradictory to the principle of free speech.

So here we have two complex concepts: the First Amendment and the "necessary emotional process" that comes with death. The former concept is distinctly Democratic, while the latter more collective in nature, and far more inevitable.

Everyone, regardless of their ideologies and voting record, will die, and we will all mourn someone who has died. Which concept, then, is more worthy of being protected: the right to say outrageous things or the "right" to mourn someone in private? Does death, ever-worthy of respect, warrant a "no free speech zone," however temporary? Justice Ruth Bader Ginsburg today wondered aloud whether the First Amendment would tolerate the Church "exploiting this bereaved family."

Though the Westboro case, like Stephen Colbert's Congressional testimony, should be cheered as an example of democracy and civic discourse in action, the essential, elementary question cannot be ignored: Are laws created to sustain man or to constrain him? Are they a civilizing force, or an organic outgrowth of the general will? Do we have laws because we're naturally social creatures or because man's naturally ill-tempered and violent?

A recent study suggests that early man was indeed kindhearted. Does that mean our society, with its scores of fundamentalists and wing-nuts, went wrong somewhere? 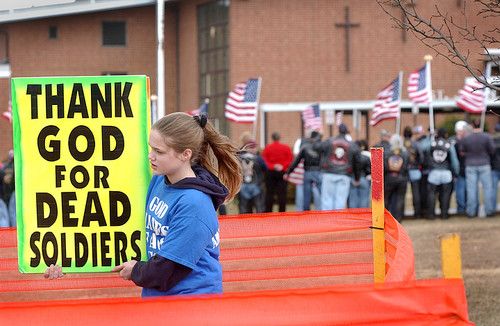 The Westboro Baptist Church's appearance before the Supreme Court today truly embodies this nation's democratic ideals: opposing sides, with extremely different, vocal opinions, are given a chance to present their case before the highest court in the land, thus proving that little people have a place in government, too.

Of course, dig a little deeper and more fundamental debates begin to rear their head, one that's unique to the democratic challenge and one that's a bit more universal. It turns out these two elements come to blows, presenting Americans with perennial questions about free speech, death and the meaning of laws.

A jury originally answered in the negative, and awarded Snyder's family nearly $11 million in damages for the Church's actions. The WBC appealed, of course, eventually sending the case to the Justices.

The ACLU, 21 media outlets, including representatives from the New York Times and the Associated Press, and Free Speech scholars all issued briefs on behalf of the WBC's First Amendment rights. Most reasonable people would consider the funeral protests conducted by members of the Westboro Baptist Church to be inexplicable and hateful," reads the brief submitted by the Reporters Committee for Freedom of the Press.

Without a doubt, the church’s message of intolerance is deeply offensive to many, and especially so to gay Americans, Catholics, veterans, and the families of those who sacrificed their lives defending the United States. But to silence a fringe messenger because of the distastefulness of the message is antithetical to the First Amendment’s most basic precepts.

Yes, their brief addresses the case's "repugnant" details, a dead soldier's funeral, the signatories are quite clear in spelling out their Constitutional concern: "The particular facts of this case should not be used to fashion a First Amendment exemption for offensive speech." Over three dozen U.S. Senators see the matter through a more apolitical lens.