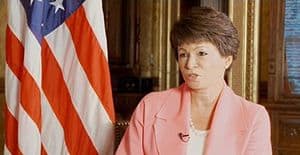 Today, Capehart defended Jarrett, saying she's "no bigot", and published an apology from Jarrett for her use of the term.

"In a recent interview I was asked about the recent tragedies about gay youth who have committed suicide, and I misspoke when I referred to someone's sexual identity as a 'lifestyle choice.' I meant no disrespect to the LGBT community, and I apologize to any who have taken offense at my poor choice of words. Sexual orientation and gender identity are not a choice, and anyone who knows me and my work over the years knows that I am a firm believer and supporter in the rights of LGBT Americans. Most of all, I hope this does not distract from the issue I was asked about — the desperate, tragic decision by some young people who feel that their only recourse is to take their own lives because they are being bullied or harassed because they are gay, or because others believe they are gay. We must instill in young people respect for one another, and we must set an example of mutual regard and civility to create an environment that is safe for every person, regardless of sexual orientation or gender identity."