Top 10 ranked West Point cadet Katherine Miller, who was one of the military soldiers that accompanied Lady Gaga to the VMAs earlier this year, that resigned from the academy earlier this year after deciding that living life as a closeted lesbian under DADT was not the life she wanted to leave. The Associated Press reports on her story: 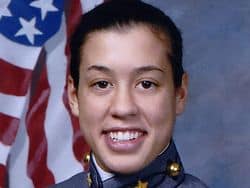 She wanted to be a leader at the academy, someone with honor. She excelled, ranking near the top of her class of more than 1,100 cadets going into their third year. But Miller also was hiding in fear. "I realized that I wasn't becoming the leader of character that I wanted to be," she said.

Other gay cadets in her small circle of friends tried to persuade her to stick it out. Conforming, after all, is a tenet taught in the military.

"It was definitely an option," Miller said. "I just chose not to live my life that way. I'm pretty stubborn in my values. I needed to get out and declare who I was."

She still wonders whether she should have stayed and tried to survive under the policy. "At the same time, I don't think that I would've made nearly the impact that coming out publicly made," she said.

But Miller wants back in: "I'm trying to get back into the military. I'm not trying to make that difficult when that occurs."

Meanwhile, information from next week's much anticipated DADT survey from the Pentagon continues to leak ahead of its release. It's being reported that out of all of the five branches of the armed forces, the Marines are the most resistant to seeing a repeal of the policy. Marine Commandant Gen. James Amos has made no secret he shares the same point of view though chairman of the Joint Chiefs of Staff Mike Mullen said just last week that there was "no question" Amos would go along with a repeal if one were implemented by Congress.